The Port Valdez Company collaborates with Great Land Trust, EVOS, and the City of Valdez to create a new public recreational area in Valdez, Alaska.

Great Land Trust facilitates transfer of 184 Acres of the famed “Meals Hill” to the City of Valdez to be Used for Public Recreation BALANCE OF OUR PROPERTIES are in various stages of development and are within the Valdez township. If you have questions please submit the form to the right. Thank you. 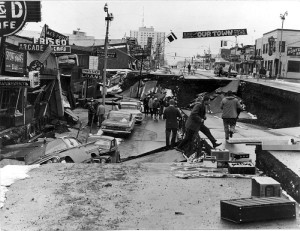 Damage to Fourth Avenue, Anchorage, Alaska, caused by the Good Friday Earthquake in 1964.

The original Hazelet and Meals Homesteads, totaling 700 acres of land were filed in 1899. On “Good Friday” 1964 an earthquake destroyed the Town of Valdez and the Army Corps of Engineers declared the ground under the town permanently unstable. It was decided to move the “Town” to Hazelet/Meals lands and The Port Valdez Company, Inc. (PVC) was formed on May 21, 1964 to assist in relocating the City of Valdez from its original location (“Old Town”) to its present location (“New Town”).

Of the original 700 acres of land owned by the Hazelet and Meals families, 110 acres were given to the City of Valdez for its “New Town.”

The launch of the pipeline transformed Alaska from a frontier state to an economic force. In its 38+ years of operation, TAPS has generated over $183 billion in state revenue, and the oil and gas industry accounts for roughly 92 percent of the state’s discretionary funds.

There are still approximately 40 billion barrels of known reserves on the North Slope and its off-shore environs.