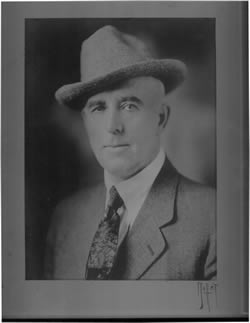 George Cheever Hazelet was born on October 11, 1861 at Senecaville, Guernsey County, Ohio. He was educated for the teaching profession, and in the summer of 1897 when news of the Klondyke gold discovery electrified the world, he was principal of the high school in the rural town of O’Neill in north central Nebraska. He married about ten years previously Harriet Potter, and at this time the couple had two sons, Calvin aged 9 and Craig, aged 7.

Hazelet in his Journal reveals that he and eventual long time partner Andrew Jackson (“Jack”) Meals as men of indomitable energy with consuming ambition to rise in the world above their station at the time. It is also clearly evident from Hazelet’s writings that the principal motivation was their desire to provide more abundantly for their families to whom they were devoted. As with tens of thousands of others at the time, the exciting news of rich gold strikes in Alaska proved a compelling force to justify what they new would be a long and arduous separation from family and friends. 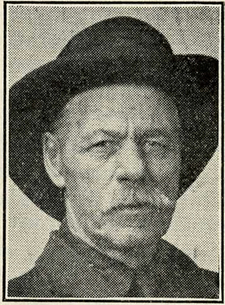 Jack Meals was a man 9 years the senior of George Hazelet, born November 18, 1852. He was a Nebraska bullwacker/farmer/rancher/stage coach driver/wagon train scout/bronco rider—a man with no formal education, although endowed with many admirable characteristics and talents, one most noticeably curious for a man of his background being a natural genius for mathematics. In Nebraska he held the office of Treasurer for Holt County. In later years during his residence in Valdez Meals became a successful and highly respected land surveyor and construction engineer.Together George Cheever Hazelet and Andrew Jackson Jack Meals left Omaha, Nebraska February 17, 1898 by rail on an adventure and journey that most men and women today only dream about. George Hazelet and Jack Meals, neighbors in Atkinson (O’Neill County) Nebraska, traveled to Alaska to try their hands at prospecting.

They traveled three weeks, first by railroad from Nebraska to Seattle and then by steamship (S.S.Excelsior) to Valdez — arriving in Valdez on March 8, 1898. At that time, Valdez, located at the East end of Prince William Sound, was a collection of 200 tents, one frame house and no wharf. With the other passengers, Meals and Hazelet off-loaded their supplies onto the ice and began the process of making several trips back and forth – moving their camp gradually upward over Valdez Glacier and toward the Interior into a vast unknown—looking for gold.For the next several decades, Meals and Hazelet explored the Copper, Chistochina and other River Valleys, established the Chesna Mining and Improvement Company (backed by investors in Nebraska), worked several mining claims, were present and influential at 1898 meetings to name and plat the City of Valdez, built roads and dams, established the Port Valdez Investment Co., and served in various public offices as Valdez and the surrounding area evolved. In 1900, Hazelet and Meals bought a train carload of horses, sawmill, complete hydraulic mining apparatus, and cattle to aid their efforts. Among their many achievements George Hazelet eventually became the first mayor of Cordova, Alaska. Jack Meals served as Deputy United States Marshall.

In 1901, they homesteaded 654 acres on the North side of the Sound—the site of Valdez today. Following the March 27, 1964 (Good Friday) earthquake and subsequent Tsunami that destroyed “Old” Valdez, descendants of these two Valdez pioneers donated 140 acres of their land to relocate Valdez’ “New Town.” A.J. Meals’ son, Owen Meals, and G.C. Hazelet’s sons, Craig and Calvin Hazelet, were key participants in the recovery of Valdez during that time, actively representing the nearly 100 descendants of the two men then owning the land.The Port Valdez Company, Inc. (PVC) was incorporated on May 1, 1964 to facilitate this transfer of land and continues to work today toward the growth and health of the City of Valdez. The two main streets in Valdez are named after these two pioneer families—Hazelet and Meals.

In 1903, Hazelet and Meals moved their families to Valdez. Their children attended school and later started businesses in the area. Others went on to careers outside of Valdez, but always returned to their “home” and legacy—Valdez, Alaska. 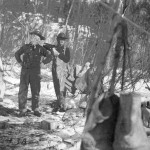 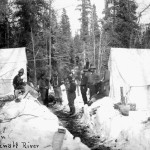 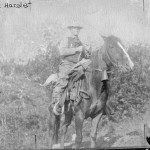 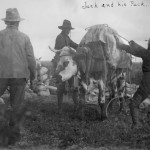 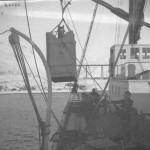 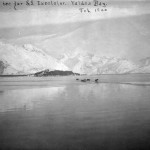 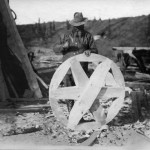 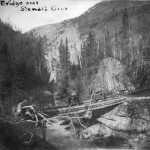 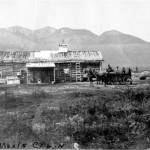 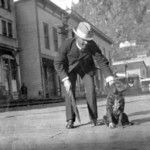 We were loathe to leave the spot and could hardly shake off the spell that bound us, but we finally became conscious that night would come and we must reach camp so we slowly wound down that mighty mountain side, over the small glacier and into the canyon beyond.
(page 95—August 30, 1898)

At times the ice would close in around us and we were compelled to go where it wished to take us, and of course it ran us into rocks, but we would eventually get off and away we would go again.
(page 116—October 18, 1898)

Oh! If I could only know she and my boys were well and getting along nicely how happy I would be. The work and hardships amount to nothing but thoughts of home and loved ones almost drives me wild at times, I hardly know how to put in the next five or six days.
(page 117—October 18, 1898)

My only hope is to keep hard at it. Since last writing I’m one year older and now have passed my 37th birthday. How old that seems. And that too with a loving wife and two dear boys to provide for, and nothing, nothing, nothing—but I will have it, surely all these hardships and long separations cannot for nothing. Surely will succeed, I must.
(Page 117—October 18, 1898)

Drum, at some remote period in her history has had her whole side blown out and has vomited forth for years, that which she could not hold down, on to this old time glacier, the glacier in turn has taken up the material and transported it far down the Nitona towards Copper. Millions of tons of rock, clearly showing a high degree of heat, are strewn all over the small valley. The scene is one of almost unsurpassed grandeur. What a sight it would have been to beheld Drum when she was belching forth all this material.
(page 121-122—October 30, 1898)

The thermometer must have registered 30 below yesterday and 40 below today. Yet we have perspired like horses all the time at work. One might get some idea of how hard the work is from this.
(page 134—November 20, 1898)

It seemed before I got here that we surely would find pay dirt on bedrock, but now that we are here and have gone through with enough work and hardship to kill the average man getting here, it don’t seem as if we will find anything, but courage, old man, courage, remember the darkest hour is always just before the dawn.
(page 142—December 19, 1898)

Now for a short resume of the years work since the day I said the sad goodbye. First, we, A. J. Meals and I have traveled by rail and water 3500 miles. Have pulled sled loaded with 200 lbs to 800 lbs 930 miles. Have sawed lumber for two boats and built one. We have gondoliered boat 52 miles. We have shot boat on Klutina, Copper and Chistochina rivers 223 miles. We have towed boat loaded with from 1000 lbs to 2500 lbs 193 miles.

We have packed (packs running from 50 lbs to 80 lbs) 460 miles, and have not up to date reached a point north of Valdez to exceed 250 miles. We have sawed 800 feet of lumber for sluicing and built 96 feet of sluice box, constructed dams on Chistochina 110 feet long, dug a ditch 75 feet long and sluiced 391/2 yards of river bar gravel, from which we took $2.24 worth of gold, all of which an Indian stole. We have panned 300 pans of dit, in 95% of which we found from one to 30 and 40 colors. Have made at least 50 tests of rock and sent two specimens home for assay. We built 3 rafts, two of which we wrecked. Built one house on Chistochina 16 X 18 consisting of 138 logs, chinked it with moss and covered it with dirt. Made furniture for same consisting of chairs, table, tub, bunks, shelves, etc.

Started 11 prospect holes, being driven out of 10 of them by water after reaching a depth of 6 to 10 feet. We are still at work on the eleventh having reached a depth of 19 feet today with good show to go on down. Have run one tunnel into side hill 25 feet on top of bedrock, tunnel 7 ft high and 5 ft wide, got not to exceed one color to each two sq. ft of bedrock. We have thus excavated at least 105 ft. of dirt in depth being 7 ft long and 5 ft wide making a total of 3675 cu. Ft. of dirt removed. To thaw the same we cut and burned 50 cords of wood, hauling a part of it ¼ mile. We sawed lumber and made one pump 18 ft long which we used two days trying to exhaust the water from a prospect hole, but failed. We have sawed lumber and made 7 pairs of skis.

So much for the work, now as to results. Must say we have nothing definite. Have found two ledges, or lodes, form which we have not yet got the assay. We still have one dry hole and hope to reach bedrock here and determine whether or not there is any gold on Chistochina.

Have spent no time in idleness except 10 days at Copper Center last October waiting for our mail prior to pulling into Chistochina for winter quarters. Jack and I put in 2 days hunting moose but failed to find anything larger than a prairie dog, which had to eat as were out of supplies and 50 miles away from any. Spent 1 day shooting salmon in July got 6 large ones. Have seen no moose or caribou. I saw one bear at a distance of at last 2 miles. Have killed and eaten a few squirrels, ptarmigan and pheasants, outside of these we have had no fresh meat except about 50 lbs of moose we bought off some Iowa men on Copper River. Up to date we weigh more than we ever did in our lives and fully well. Jack is better looking and I’m not so handsome, am getting fluffy under the eyes, sure sign of old age. If we could make a find we at once pull out for home and its happiness.
(page 166—February 17, 1899) 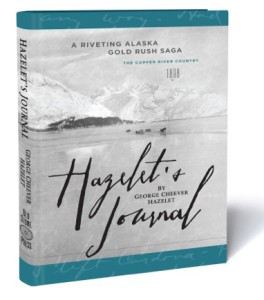 Also available at
Amazon.com or
BarnesandNoble.com
For more information about
this book go to: hazeletsjournal.com